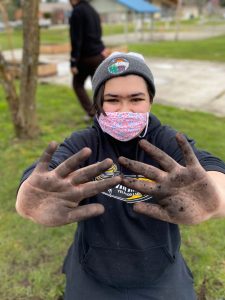 Yelm High School students had barely returned to in-person learning when one set of students was back out of class again, but this time the reason had nothing to do with the pandemic. On March 26th, two groups of FFA club members enrolled in a landscape construction course came to Yelm City Park to dig up sod and plant native species as part of the Yelm Community Garden project. Nora White and Kiana Sinner of Thurston Conservation District facilitated the work party, which accomplished a great deal in a few short hours.

Agriculture teacher and FFA Advisor Matt Mounts sees multiple benefits to involving students in the building stages. “Not only does it give the kids a hands-on opportunity to apply what we’re learning in class, but it also gives them a sense of community that, ‘Hey, I helped out,’” he says. “When they drive by the park with their friends or parents, they can say, ‘I was part of that.’ Taking ownership of a community project like this is huge.”

Construction began in January, with volunteers from The Mission Continues, a group of veterans who do service projects in their communities. The project involves multiple organizations including Bounty for Families, a Yelm-based nonprofit, the City of Yelm, Thurston Conservation District, GRuB, the Nisqually Tribe and Yelm High School’s Career and Technical Education (CTE) program. A separate group of CTE students enrolled in a Home Shop course will be designing and building park benches fo 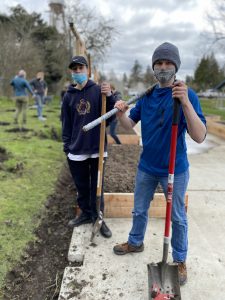 garden growing later in the season.”

Many who helped were seniors who have been FFA members since they were freshmen. They appreciate the hands-on nature of the club and that it gets them out of the classroom and involved in real-world applications. Senior Peyton Doud has learned skills he plans to use after high school. “I like learning how to calculate the square feet I need for sod or soil and projects like what we’re doing today,” he says. “When I work with my dad, I can help him out with what I know.”

Jaxson Baines, also a senior, finds that the club provides a high degree of autonomy. “It gives you the ability to think for yourself without having to rely on having someone else do things for you,” he says. “In the last few years, I realized that you can learn a lot more through hands-on than just technical experience or computers.” 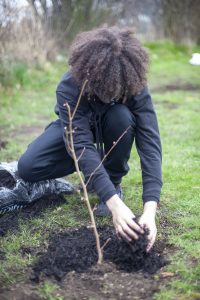 All eleven students expressed appreciation for the community garden project and the possibilities it offers for Yelm residents. “It’s amazing that we get to do this,” says sophomore Abagail Ikari. “I was low-income at one point in my life and having the opportunity to help out and see this grow from the ground up is exciting.” The community garden will be a gathering point for classes on gardening and cooking with produce. One goal is to connect residents who may be struggling financially with resources to grow their own food and help their families to eat healthily.

Aidan Rosenburg joined FFA as a freshman because he both likes getting his hands dirty and has an interest in learning how nature works and how to best support it. He believes the garden can be a community resource. “It’s important to help younger kids learn about plants and where their food comes from,” he says.  Thurston Conservation District Executive Director Sarah Moorehead agrees. “We see a huge need to support future generations in growing food not only for themselves, but whole communities,” she notes. “We’re excited to help the next generation of land stewards succeed.” The project will also serve as a teaching tool for kids in the Yelm Farmers Market Power of Produce Club, which introduces them to gardening and nutrition.

Perhaps Senior Benjamin Dagum sums it up best. His passion is for science and the environment, as well as improving his gardening abilities. “There’s a benefit in having people out here helping each other,” he says. “It really shows what the people in this community can do together.”

This site uses Akismet to reduce spam. Learn how your comment data is processed. 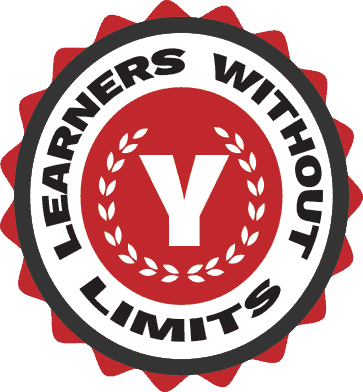 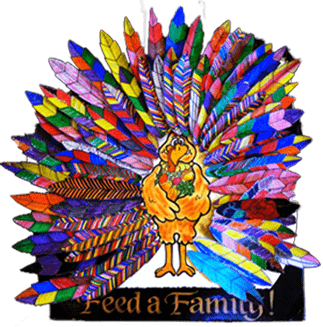 Support feeding families over the holidays.

Every $60 feeds a family of six. Gift of Gobble program is dedicated to making sure the holidays are bright for everyone.

Get our latest updated in your Inbox!

You have Successfully Subscribed!